One day to go and the first month of Autumn will be in the past! I now have a medically supervised regime in place which requires me to walk with moments of additional load achieved by either walking more quickly or walking up a hill. Scott Creek Conservation Park provides many opportunities for walking up and down hills! The theory is that this will eventually strengthen the heart muscle and reduce episodes of Atrial Fibrillation (AF). AF occurs when the heart does not pump properly but rather flutters, resulting in poor circulation and efficiency. I am taking part in a trial, comparing an exercise group with a non-exercise group, and am in the experimental group. So I decided to go for a walk in Scott Creek Conservation Park departing from Gate 8 (my favourite radio activation spot). The weather was excellent for a walk: cool, mainly sunny but a handful of rain-drops as I started out. Others had a similar idea and I passed a large group of walkers as I was heading down the hill speaking into my hand held radio. They were on the way up the hill but offered a greeting and we spoke for a while. Yes I did take a radio: two in fact (IC-80AD and a Yaesu VX5) and a few spare batteries!

I also posted an alert on Parks and Peaks indicating I would be active at 00:30z on 146.5 FM. Next time I will self-spot and indicate a QRV time!  QRV means ‘are you ready?’ But it is also used to indicate a time when the operator will be ready.

As I left gate 8 I tuned to VK5RMB, the Murray Bridge Repeater and heard some activity. I recognised a voice I knew and arranged to try 146.5 FM with Tony, VK5MRT at Strathalbyn. There was no direct path. I was a bit surprised at this. So I kept walking and then tuned the radio to VK5RSV, the South Coast Amateur Radio Club’s two metre repeater. I was hoping to stir up some activity, as the area immediately south and south west of the Park, I suspected would provide some good contacts. All I heard was silence!

I kept on walking and tried VK5RSV again. This time VK5XD, Neville answered me. He offered to QSY (change frequency to 146.5 Mhz) and success followed. Neville’s signal was full scale on my Icom IC-80AD, I was amazed. Neville lives in the suburb of Warradale, near Glenelg, but further inland. I received a report of 5 and 5. I had a quarter wave length antenna on my radio and was using full power, five watts. Neville told me he was using 50 watts into a collinear antenna.  We should have experimented with lower power! 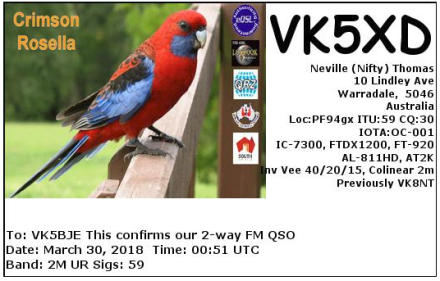 So what was the cost? Well my GPS showed a total activity time of 53 minutes. But the moving time was just 25 minutes! So I spent nearly half my time playing radio rather than walking. Perhaps I had better leave the radios at home?

I have activated Scott Creek Conservation Park many times. Here is a link to my previous activation.

The walk I took begins at Gate 8 and follows Cup Gum Track. I stopped just before the fairly steep descent to the junction of Gum Track Track with Currawong Ridge Track.

The elevation gain was 35 metres. The plot is shown below. The times are clearly shown including radio time.

This walk is one of a number I have taken in the Park over the last few weeks. Most, but not all, of the walks have been on sections of the track I have previously described as a loop. See my earlier posts on this beautiful park.

Another walk began at Gate 4 taking the right hand side track down to the creek line.

Grey Fantail in flight. This little bird did not take much notice of me but was busy catching insects. 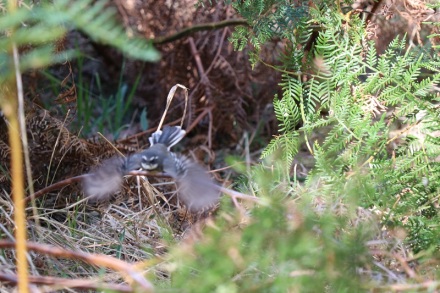 Stumpy tale lizard. A pity about the stick over the end of his nose: but I did not want to disturb her sun-baking any more than necessary.