After playing clarinet with the Payneham City Concert Band at the Strathalbyn Band Festival on Sunday morning, and armed with my portable gear, I travelled to Ferries-McDonald CP. I had earlier contact with David, VK5KC, who indicated he would like to join me in the afternoon. With the help of 146.500 MHz FM and a GPS he found me in Ferries-McDonald on a sunny, ‘warm’, winter’s day in this typical Mallee park, amongst other animals, home to Mallee Fowl.

By the time David arrived I had my antenna in place. We used his FT817nd, and while brushing away four engined very aggressive mosquitoes we managed quite a few contacts between the two of us. While some were common, some were unique and here is my list. VK5CZ/p QRP , Ian at Maurice Hill, 049; VK5LY, Larry; VK5LA, Andy; VK5IS, QRP, Ian; VK5ZAI/p QRP, Tony at Butcher Gap CP (ask Tony how far he had to travel); VK3PF/p QRP, Peter at VC008; VK3BHR, Phil at Bendigo; VK3AMB, Bernard; VK5KGP, Graham; VK5HCF/p QRP, Col at Tantanoola Caves CP (with a very civilised set up: see his photos on the Yahoo page); VK5FMID, Brian and VK3ANL, Nick.

After befriending a shingle back lizard, also known as a stumpy tail, and speaking with some walkers in the Park, we got to work. We used David’s antenna and my Ten-Tec Argonaut VI. While some of our contacts were common some were unique. Here is my list: VK5KGP, Graham; VK3BD, Brian; VK1MA, Matt; VK5WG, Nev; VK5DJ, John; VK5LY, Larry and VK5IS QRP, Ian. 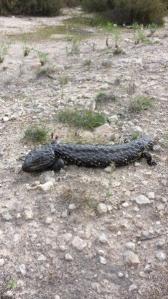 Our friendly Shingle back lizard – Photo by David, VK5KC