I promised to return to Scott Creek Conservation Park, VKFF-788 this morning but it was raining: the Bureau had predicted a 30% chance of showers. These slowly cleared through the morning and in anticipation I posted an alert on ParksnPeaks indicating that I would visit the park in the afternoon.

This afternoon and early evening was my fifth activation of Scott Creek Conservation Park. You can read about the Park in earlier entries. It is a beautiful public space. I walk in the Park on a regular basis and here are some more pictures I took on my walk on Wednesday 11th March. I cannot explain the signal dropout on my Garmin 62S after I turned the corner and began a steep climb up Currawong Ridge Track. I have walked this track lots of times and all images have been intact. Perhaps as it is steep I held onto the backpack straps near the GPS62s in my left hand breast pocket on my shirt? 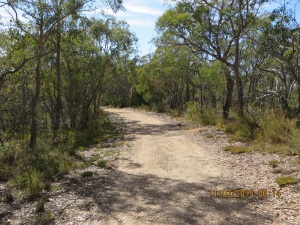 Gate 8 looking into the Park

My operating position at Gate 8 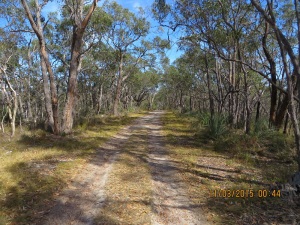 Walking down Stringybark Track before it gets really steep!

Vandals at work: or your taxes being wasted: Almanda Mine Scott Creek CP

Contacts I thought I should activate Scott Creek Conservation Park to celebrate the adding to the VKFF list of a number of South Australian Conservation Parks. The occasion was the usual Friday evening South Australian Parks activity: so I could call this entry another ‘Twilight Park’ activation. I was aiming for 44 contacts. In the end I achieved 30 contacts. I could have achieved my goal of 44 if I had been able to stay longer but I had to pack up at about 18:45 hours local. At pack up time 20 metres was really firing! I will return to Scott Creek in the future to qualify the park for the WWFF award. I arrived at the Park at about 16:00 local and spent the first 45 minutes doing a final tune on a new three-band linked dipole for 10 metres, 17 and 30 metres. A few more finishing touches will give me a second very rugged antenna for portable use. My first contact, on 7.098 MHz, was at 06:40 with VK3FQSO, Amanda then followed, VK5ZAR/P, Arno in Ferguson Conservation Park VK3PMG, Mick VK5HEL, Geoff at Ettrick Conservation Park VK5GJ, Greg VK3OHM, Marc VK3DAC, Fred VK5FLEX, Pike River Conservation Park VK5ZGY, Greg VK3DBP, Paul VK5FANA, Peter at Bird Island Conservation Park VK3PF, Peter VK5PAS, Paul at Charleston Conservation Park, VKFF-777 VK5KLV, Les at Mount Remarkable National Park (Mambray Creek) VKFF-360 VK5KPR, Peter VK5WG, Nev VK3TKK/M, Peter VK5PEP, Peter at Ferries McDonald Conservation Park VK3AV, Bernard VK5NQP, David at Cromer Conservation Park, VKFF-779 VK3FPSR, Peter VK3ANL, Nick VK2FMIA, Doug at Horton Falls National Park, VKFF-594 VK2KBC/M3, Sheepyard Flat, Mansfield VK5NAQ, Peter VK5GY/P, Gordon at Kenneth Stirling Conservation Park, VKFF-781 I thought 40 metres was getting a bit quiet and after having a look around the band I decided to migrate to 20 metres. However, when I checked the history page on ParksnPeaks I saw there were quite a few other stations active which I missed. My third last contact was on 14.275, 07:49z, VK4KUS, Steve, then VK2GJC. Greg from Ulladullah, whose excellent log-keeping enabled him to tell me we last had a qso on 80 metres in 1992 and finally on 14.205, EA8CCQ, Orlando in the Canary Islands. I gave Orlando 5 & 9 and I was 5 & 5. 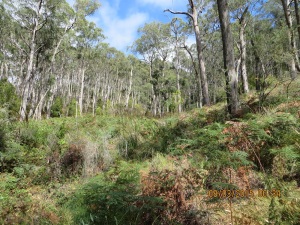 Eurilla Conservation Park is a small park which adjoins Cleland Conservation Park, close to Mount Lofty summit, and is part of the Greater Mount Lofty Parklands. Eurilla Conservation Park is roughly triangular in shape and the hypotenuse joins the Mount Lofty Botanic Gardens, the western side of the park adjoins private property which fronts Summit Road and the northern side joins the Cleland Conservation Park. VK5PAS, Paul, has previously activated the Park and his blog contains a description of how he approached his activation spot. It is not possible to gain access to the park from Summit Road. On Friday 6th February I travelled to the Park for an exploratory survey (see below). I could find little specific information about the Park, other than a fire plan that deals with a number of other Hills Face Zone Parks. I also found material about the flora of Eurilla Conservation Park. However, a letter to the Editor of the South Australian Register provides information on the word ‘Eurilla’.

Sir— Article No. 18 of ‘The Toilers of the Hills,” published in the Register of April 1, contains the following:— “It is also a pity that the native name of Mount Lofty (Yu-re-illa) has not been adopted for one of the mansions near the summit.” It may afford some satisfaction to the author of these interesting articles to know, that when building my house on Mount Lofty some eight years ago I placed myself in communication with my friend the Surveyor-General to ascertain the native name of Mount Lofty with the view of using it as the name of my place; he informed me that it was Yureilla, pronounced Yurilla. The native language not being a written one I did not feel bound to adopt the spelling of the word as given to me so long as I adhered to the correct sound. In selecting the name I therefore took the liberty of spelling it Eurilla, and as such it is known amongst my friends. I am. Sir, &co., WILLIAM MILNE. Eurilla, Mount Lofty, April 7.

To access the Park I travelled from Crafers to Piccadilly taking Piccadilly Road, turning left into Lampert Road and then a right hand turn into Sprigg Road. Take Sprigg Road until you pass Ross Road on the right and then as you take a gradual right had sweeping curve in Sprigg Road you will see a sign for Cleland Conservation Park. 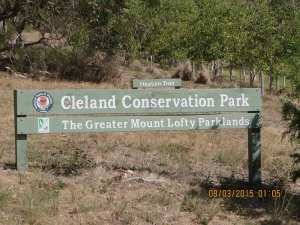 There is a small parking area for about three or four cars. The track is marked Heysen Trail, and this particular section is called Eurilla Track. But you are not in Eurilla Conservation Park yet! You walk for just over 50 metres along the track and you will spot a Heysen Trail marker on the fence post. At this point turn left and climb a small rise and then you will see a fire trail/vehicle track, pictured below.

You follow this to the two metre high chain fence. This fence forms the boundary with the Mount Lofty Botanic Gardens. When you reach the fence turn west, that is, turn right and walk to the end of the track. You are in Eurilla Conservation Park soon after making the right hand turn. However, I walked to the end on the track where there is a turning circle and used a small bush to support my seven metre squid pole and then erected my 40/20 metre linked dipole. The walk is not too long. It is 680 metres and a fairly gentle walk back to the car park. 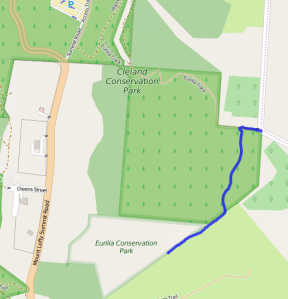 On Friday I walked 1.85 kilometres as I wanted to take some bearings and check out a few other tracks. Today I spoke to a walker as I was getting back to the car park and he said that the walk along Eurilla track to Mount Lofty summit is quite steep. That can wait for another day! 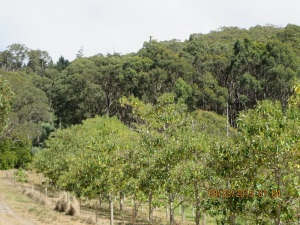 Carminow is one of three historic residences on the Eastern side of Summit Road approaching Mount Lofty summit from the South. It was built in 1885. Those who have activated Mount Lofty Summit, VK5/SE-005, from the Eastern side will know the location. The tower is visible in the picture at the centre on the tree-line. The other two residences are Eurilla, 1884 and Mount Lofty House, 1858. All three houses were badly damaged or destroyed by the 1983 fires and all have been rebuilt.

Band conditions were challenging but I was pleased to have contacts with 25 stations in VK2, VK3 and VK5. I tried 20 metres two times but was not successful on that band. The VK2 WIA broadcast signal on 14.160 Mhz was very strong.