The tourist road to Strathgordon, at Lake Pedder, where we arranged to stay on the evening of the 14th February, passes by the Mount Field National Park. We spent about three hours in this park, an early dedication of land for recreation and conservation purposes, dating from 1917. We had an enjoyable discussion with two Rangers. They were very helpful. Although I lived in Hobart for three years (1960 – 1963) I had not visited this Park so it was new for me. We drove to the ski fields and enjoyed a walk and collected a heap of rubbish to return to the base.

Unfortunately, despite calling on both 20 metres and 40 metres I was unable to get get a qso. Propagation was poor and the bands apparently dead.

Further along the road, driving towards Strathgordon, it is possible to access the South West National Park. On 40 metres I enjoyed contacts with VK3JNS, Charles at 05:37; a long contact with VK3AXH, Ian and a great contact with VK3PF, Peter, who kindly alerted potential chasers by an entry on Peaksnparks. Then followed contacts with VK3AMB, Bernard and at 06:20, VK2QR/P2, Rob on SOTA peak VK2 SM 012. Then all was quiet. We had to move on to Strathgordon. 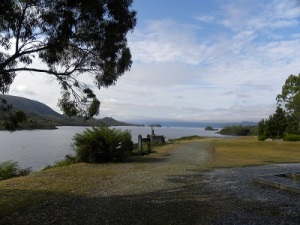 We spent quite a time looking at the new Lake Pedder from our accommodation at Strathgordon and it is quite magnificent. Is it better? Well I am going to sit on the fence, or perhaps a log or even a rock! The original Lake Pedder was certainly beautiful as can be seen in my less than perfect images below. But Tasmanians enjoy their electric power and, as well, it is sent to the mainland as demand requires. There is a cable under Bass Strait for this purpose.

On Regatta Day, 12th February 1962, I arranged to go to Lake Pedder in the South West of Tasmania. This was my first visit to this part of Tasmania not long after it became a National Park (1955)  and before it became a World Heritage Area.  Lake Pedder was still in its natural state. It had not been flooded for Hydro Electric power stations and, for most people, was only approachable from the air. A friend of mine arranged for the hire of a Piper Tri Pacer from the Tasmanian Aero Club and four of us set out for the day from Cambridge Aerodrome. The procedure for landing at Lake Pedder was to come in slow and low and drop a piece of sharpened wood, which if it stood vertical, indicated the sand was hard enough to support a light aircraft. And so all went as per the plan and we were able to land on the beach. My pictures have the typical blue cast of Kodachrome and try as hard as I could I could not reduce it significantly with my scanning software (Silverfast SE using the Kodachrome setting). This is brilliant software and in the photo of the approach to Lake Pedder I introduced some additional Cyan which I think helped to diminish the blue cast. Of course the original slides are 52 years old! These pictures were taken with a Kodak Retinette 1A entry level 35mm camera and I did not have a UV filter at the time.

It was a hot day in Hobart and our flight home over Mount Wellington was something to remember! 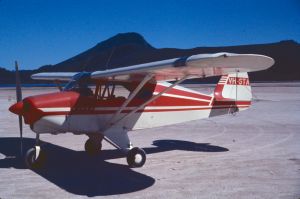