Our main objective as a family was to meet at Lakes Entrance. We had booked a cabin for the ‘oldies’ and a camping site for our Sydney family. We left Healesville early as we had arranged to meet Peter, VK3PF, at Traralgon for coffee and to see his new 4 x 4 vehicle. Peter had made some suggestions designed to give us the optimum route to Traralgon and at 10:00 am we were at our meeting place. Peter called on the repeater to indicate he was not far away (and after a three-way contact with Brian, VK3BBB) we were soon enjoying a coffee and chat which extended for an hour and a quarter. Peter was setting off to drive to NSW and we only had to get to Lakes Entrance. It was great to catch up and I really liked the way Peter has set up his vehicle. There will be lots of activations in the future! And there were lots for Peter while he was away on his trip to Queensland which commenced after he left us.

On the 20th the family decided to visit the Buchan Caves. They had a great time and I drove the extra 15 kilometres to the Snowy River National Park to begin my quest for 44 contacts. I wanted to get to this Park in far East Gippsland. On a previous trip I managed to activate all of the National Parks in the East of Victoria with the exception on the Snowy River National Park. One of the Rangers at the Buchan Caves gave me a simple map and after leaving the bitumen road to Orbost from Buchan and taking Basin Road (gravel road in good condition) and then Old Basin Road, I was soon at the Five Ways junction. I took a left hand turn and 300 hundred metres up the road I was soon at an excellent location pointed out by Peter. There was plenty of room, even for the 80m dipole, and absolutely quiet, except for the birds.

The arrangement was that we would meet in Buchan for lunch at 13:00 hours, so I had a bit over an hour for my activation. 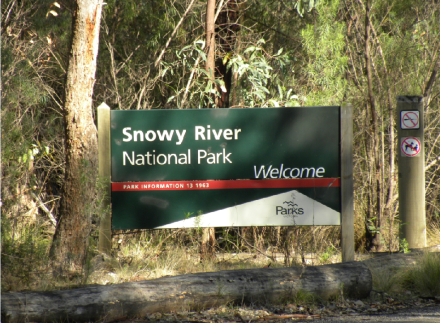 The Snowy River National Park is 114,505 hectares and was reserved as a National Park in 1979. It is 390 kilometres from Melbourne. Once again we had the excellent Victorian Government Visitors Guide. I recommend these guides and you can down load them to your personal device. 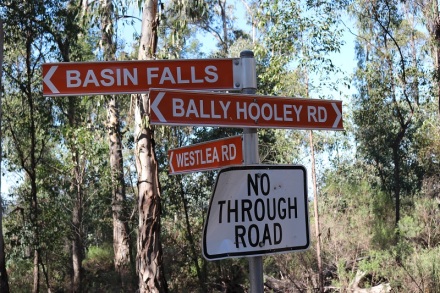 I was soon set up, using a convenient stump as a base for my squid pole and at 00:58 had my first contact with:

VK3FOWL/P Julie at a school

Twenty-eight contacts in an hour with time for a few photographs and then pack-up time and back to Buchan for lunch. All contacts, with exception of that with VK4TJ, were 5 and 8 to 5 and 9 and my received signal an s point less than I gave. The 40m band was in great condition.

After lunch we returned to the Park to spend the afternoon together and try and take some memorable photos. We drove to the Bally Hooley day visitors area. We had the place to ourselves but there was a family camping nearby. I did not try to activate from there as I did not want to disturb campers or day visitors. The junction of the Snowy and Buchan Rivers is a beautiful location. We spent quite a few hours enjoying this iconic part of the Park. 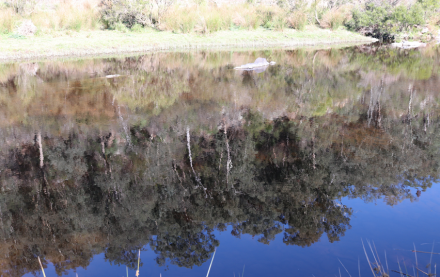 This photo shows some reflections in the Buchan River which was still and there was no wind. 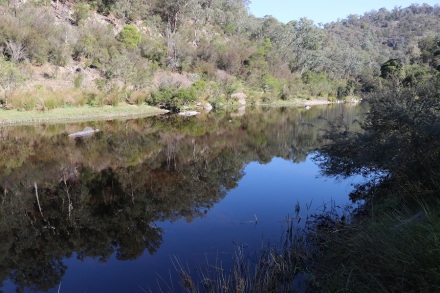 Another view of the reflections. 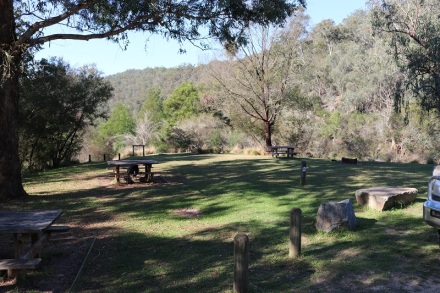 Bally Hooley Day Visitors area which adjoins a camp ground. The track to the rivers begins at this location. 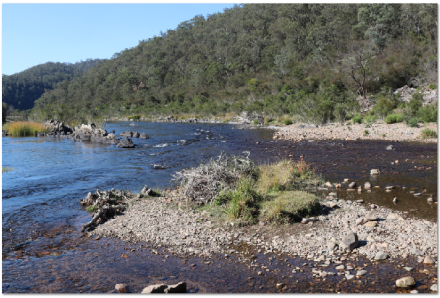 This photo shows the junction of the Snowy (on left) with the Buchan River (on right). 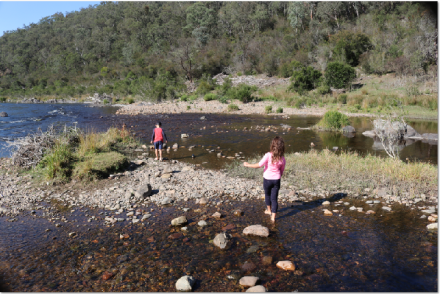 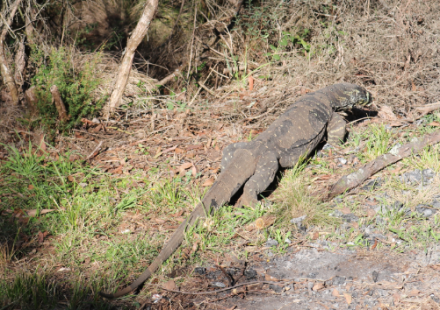 Meanwhile back at the camp I saw this goanna heading for a camper’s tent: when she/he saw me a change of direction was called for. I thought the goanna was used to people and probably lives nearby.

Our family had to return to Sydney on Saturday as the children were due back as school on Monday morning. We decided to go back to the Park and I set up in the same area as I used on the 20th April 2017.

I was on the air at 00:23 on 40 metres and again conditions were good. I had alerted chasers to my activation the night before.

My first contact was with VK5WOW, operator Hans, VK5YX, 59 and 58.  ‘Wow’ was I happy to get a contact with the special event station for the Wireless Institute of Australia Annual General Meeting and Convention to be held in Hahndorf over the weekend beginning 19th May 2017!

‘Wow’ is an exclamation when you are impressed or surprised. It relates to the sub-theme of the convention that ‘Radio is Magic’! We are hoping to create some ‘Wow’ moments over that weekend.

VK3HBZ, John at Bairnsdale, a local. Signals were 5 and 9 both ways.

VK3YE/P Peter getting his feet wet!