While at the Friends of Parks Inc. Forum I heard Parks staff refer to small Parks as ‘Pocket Parks’. Nepean Bay Conservation Park is clearly a pocket park: it is a mere 30 hectares and conserves typical Kangaroo Island coastal sand plains habitat. It was gazetted in 1974. We had a challenge in locating this park. We could not find any signs. But, we did find the boundary fence. I am a devotee of good maps and GPS technology! We travelled down a long, winding track, running parallel to the shore-line until we could go no further. There were too many trees were across the track as a result of strong winds and storms. 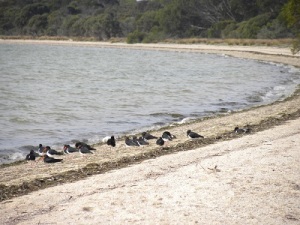 Eleven contacts were enjoyed from this Park beginning at 04:01 UTC. They were: VK5LY/M, Larry; VK5KGP, Graham; VK3PF, Peter; VK2JDS, Dave; VK5FD, Allan; VK3XNH, Neil; VK5ZAR, Arno; VK5AN, Graham; VK3AFW, Ron; VK5ZGY, Greg and VK5NFB, Don. My operating position was just a few metres away from the beach and partially shaded by coastal scrub. One could describe such a spot as idyllic!