I went back to Mark Oliphant Conservation Park today, 10th March 2014. It was my second activation. My first was on 21 May 2013 (see blog for August 14th 2013). VK5PAS, Paul, encouraged me to become active today, and we did manage a Park to Park contact. Paul was in the Onkaparinga River National Park. I chose a position not far from my first activation spot. I only managed eight contacts. I thought the band was in reasonable condition and I called CQ frequently. My first contact was with VK5PAS/P, Paul at Onkaparinga National Park; VK5EMI, John; VK5KGP, Graham; VK5WG, Nev; VK3BHR, Phil; VK5NWE, Roger; VK5MBD, Bill and VK5EMI, John for a second time.

May be I was a bit tired. Yesterday I attended the first VK5 SOTA & Parks Symposium. This was organised by VK5PAS and the Adelaide Hills Amateur Radio Society Inc. It was a great day. It was my privilege to present two papers: the first was on using Lithium chemistry batteries and the second, on preparing to purchase an ‘Adventure Radio’.  So today I operated using my 8.4 amp hour LIFePO4 battery. I used the battery last night for an hour or so running a five watt FM radio in DStar Hot Spot service and also for today’s activation and the voltage still reads 13.01 volts. I am really happy with this and with a smaller battery, 4.8 amp battery as a back-up and a similar size LiPO and should be able to save my back! I am looking forward to some cooler days and some hiking!

We arrived home on Friday 28th February. We had a great time and I wish to thank all of the amateurs with whom I had contacts. Working with five watts is always a challenge and it was magnified, particularly from the southern end of the state and when conditions were poor on the bands. Nevertheless I was able to tally 134 contacts. I activated 11 parks, two of them twice, from different locations, and visited a number of places I had not been before and enjoyed some tourist experiences. 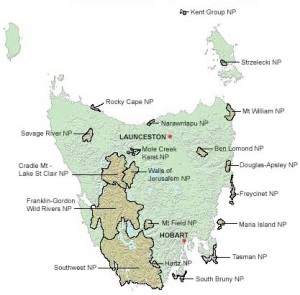 All contacts have been transposed into Ham Radio Deluxe and up-loaded to Log Book of the
World.

I received a pleasant surprise when I arrived home: I now have the Keith Roget Memorial National Park Award from Amateur Radio Victoria. Eighteen parks activated and 24 parks worked: I still have a long way to go! 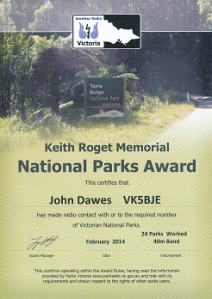