After visiting the Arthur River region and enjoying a cruise on the Arthur River on the 11th February we travelled on the 12th back to the North West Coast and to Wynyard before taking the Murchison Highway to Queenstown. The next day, the 13th,  we enjoyed a wonderful trip on the West Coast Wilderness Railway, the ABT Railway from Queenstown to Dubbil Barrill and return. 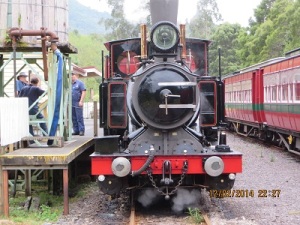 Front view of the beautifully restored loco: a 4 2 wheel base

Leaving Queenstown on the narrow gauge: 3′ 6” 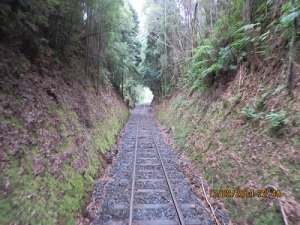 The third rail in place

The Heritage Car: note the balcony

I have looked forward to travelling on this train since its re-birth as part of the Federation commemoration. It last worked as a commercial railway in 1963, the year I moved to Melbourne for work. After arriving at the station on the return we set off for the Lake St Clair resort in the Cradle Mountain – Lake St Clair National Park.

While I posted my intention of activating this park, propagation was not good. I finished up joining the Sewing Circle Net, apparently Tasmania’s oldest amateur radio net. It gave me a chance to announce my presence to the locals! Eight contacts were enjoyed, although there were many more on the net. I had contacts with the following stations: VK7FKEV, Kevin; VK7CL, Cedric; VK7FLAX; VK7GW, Geoff; VK7BDX, Gavin; VK7FWAZ, Warren; VK7MBP, Max; VK7BI, Steve; VK7NDQ, Alvin and VK7FAZZ, Adam.