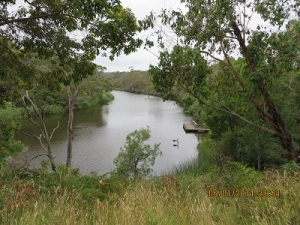 The Lower Glenelg National Park preserves land on both sides of the Glenelg River upstream from Nelson and extends to the South Australian border. We drove into Pritchards: it was like Bourke Street Melbourne! There were people, vehicles, caravans and camps everywhere. I saw two National Parks personnel and discussed with them what I was intending to do and they suggested Moleside Picnic Ground. When we arrived there, just a few kilometres from Pritchards there was no one in sight. I set up my gear using a park Picnic table in a most beautiful spot. A 4 x 4 utility towing a trailer pulled into the area and fathers and two daughters, I think, proceeded to unload their canoes for a paddle down stream. They were only slightly interested in my activities.

I was on the air at 23:27 on my last Victorian activation for this trip. The band was quiet, I checked the frequency and then called CQ. VK5LY, Larry was my first contact, then VK3PF, Peter; VK3YY/p, Glenn at Tidal River, Wilsons Promontory National Park (a new Park for me); VK5PAS, Paul; VK1MA, Matt; VK5JDS/5, Darryl, at Port Lincoln; VK5NQP, David; VK5WG, Nev; VK5FMID, Brian; VK5FRCP, Rex; VK5HCF, Col; VK5EE, Tom; VK5TD, John; VK3BHR, Phil and VK1RX/p, Al, on SOTA summit VK2 SM 093. Fifteen contacts and it was time to go.