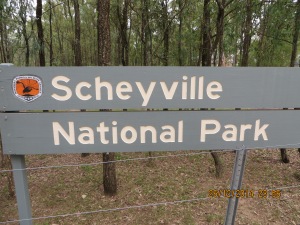 Scheyville (pronounced Sky-ville) National Park is 920 hectares and located about five kilometres east of Windsor and North- West of Sydney.

It has both geological significance being the largest single remnant of Cumberland Plain vegetation on shale soil. It has grey box, forest red gums and narrow-leafed ironbark trees. It includes the Longneck Lagoon where we went for a walk. This was a great place for birds and bird-song. 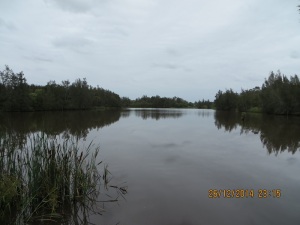 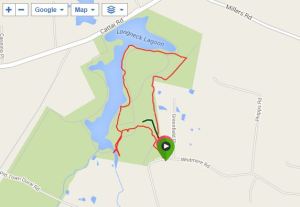 On a historical view the Park includes relics of military buildings dating from the 1920s to the 1960s. And more recently Scheyville was used as a migrant hostel. 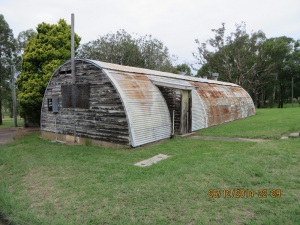 These few notes were take from the excellent NSW National Parks and Wildlife Service brochure. We obtained our brochure from the information centre at the Cumberland North Area Office of the service located near the 1929 Georgian Revival administration office within the Park.

I set up my station on an old building formation about 400 metres away from the administration building. I had great expectations of getting at least 10 contacts. After all is was Saturday! I checked out the noise levels on the car transceiver (Yaesu 857D).  It was noisy in an RF sense, and, later, I could even hear a nearby landowner at work with a lawn-mower. The noise peaked on 7.100 Mhz. Nevertheless I thought is was manageable and I decided to stay. I set the power level to 10 watts. I called (on 7.110 Mhz) VK3VTH/P3, Tony (01:50 UTC) who was in the Organ Pipes National Park. Signals varied but eventually we made a good contact after I wound my power up to 30 watts. I gave Tony 5 and 9 and he gave me 5 and 3. He was using a 100 watt transceiver. He was pleased with a new Park for the VKFF award.

I heard no other stations well enough for a contact. I did hear Joe, VK3YSP/P3, but in and out of the noise. He was speaking with Peter, VK3PF/M who was on his way to a summit. My aim was to have a contact with Joe at Burrowa-Pine Mountain National Park. (I have four Parks remaining for the 45 needed for the KRMNPA, including Burrowa-Pine Mountain NP). But I heard Joe say he was two hours from his destination. I decided I would move to another Park – hopefully with less noise and in time to work Joe and Julie. Cattai National Park, VKFF-092 was set as the new destination in the GPS.

I am sure it would be possible to find an RF quieter location. Maybe the locals know the best spot. But given this was ‘taking’ a few hours off from family time I am pleased to have had two contacts.