I planned three radio excursions while we stayed in Canberra. In the end I achieved two.  My attempt to activate Mount Stromlo, VK1/AC-043 was abandoned. While I did read a number of blogs about this SOTA summit which suggested that the second hump, about 500 metres away from the Australian National University’s new building and the telescopes was suitable, on the day I decided it was too warm and too humid for the walk. I tried two locations and the noise level was about S8. I wanted to activate this summit because it was one I was not able to visit during May when I attended the Wireless Institute of Australia (WIA) Annual General Meeting. So I then decided to travel to Tidbinbilla Nature Reserve, VKFF-0989, about 37 kilometres from Canberra. This is a gated Park. On arrival I purchased an entry ticket ($7.50). This was a concession for Seniors. I didn’t ask for the concession. My hair colour probably did the trick! I didn’t regard this as ageist or reverse discrimination and I told the Rangers why I was visiting the Park and asked could they suggest any good locations. They were very interested in my radio activities. I took the liberty of giving them Andrew’s (VK1AD) blog URL and also mine. They produced a map, marked two spots, and suggested that I have a look. I checked out both locations and settled on the second away from any visitors. I had the area to myself for the whole time. I was impressed!

My spot at Tidbinbilla Nature Reserve 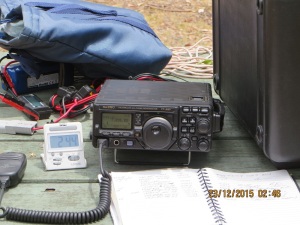 On this activation I used the FT897 set for ten watts and LiFePO4 batteries. The battery just visible under my lunch bag (insulated), which was used to keep the direct sunlight off the battery. This photo was taken in a quiet spot between my contacts with VK2LKW at 02:32 and VK3NBL 02:47. The FT 897 travels in the black plastic case protected by an foam inner lining. The picnic table was about 75 metres from the car park. The drive from Canberra to the Park is well sign-posted and I recommend this Park to any visitors to the ACT.

Again I would like to thank all of the chasers who helped make this activation so enjoyable. 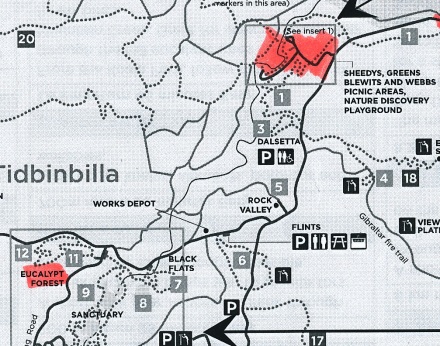 The map shows a portion of the Tidbinbilla Nature Reserve (Map courtesy of the ACT Government). The two areas coloured in red are the suggestions made to me by the staff. I chose Webbs which is near the turning circle in the top shaded area.