I have activated the Park before. Here is a link to that activation. 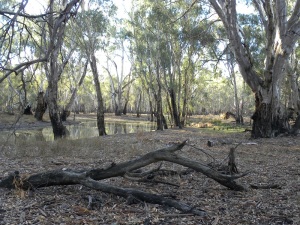 We arrived in Echuca at about 3.15pm, secured accommodation and then decided it was too late to drive to Terrick Terrick National Park for a second visit. So we went back to the Barmah National Park and I began to set up just inside the Park boundary not far from where the Kingfisher Cruises leave. I decided to use a picnic table as the point for setting up my station. As I was doing this a 4 x 4 came along on the trip out from the Park. The driver pulled up in a hurry. A tall man with hair the same colour as mine got out. He had a wide grin on his face and came marching over. I soon realised it was Tony, VK3VTH/P3. Tony told me he had been in the Park and successfully activated it with 66 contacts including some DX. What a great experience. We chatted for about 15 minutes before he had to leave for his campsite. Tony and I tried, unsuccessfully to meet in the Brisbane Ranges National Park. I am sure pleased we were more successful this time. I asked him what made him decide to stop. He said he saw my squid-pole. 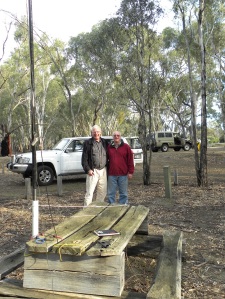 I quickly gained 15 contacts, including two on 20 metres one of which was a DX station, YJ8RN, Rob.