Kelly Hill Conservation Park, of 21,254 hectares, is known for its ‘extensive cave system, wilderness areas and beautiful coastal scenery’. We found a spot near Gate 1, no where near the main entrance to the caves, and were thus undisturbed except for some contractors leaving the Park in a minibus.

In the bush at Kelly Hill CP 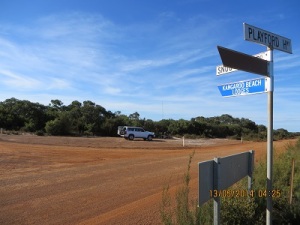 If you have a look at a reasonable map of Kangaroo Island there is a dot indicating the highest point on the Island. The dot is on the corner of Playford Highway and Snug Cove Road. The summit is un-named. VK5PAS, Paul and VK5AKH, Andy activated this summit in August 2013 in weather which even the ducks would complain about! We were more fortunate with the weather. It was a warm day and a shirt without jacket was fine. 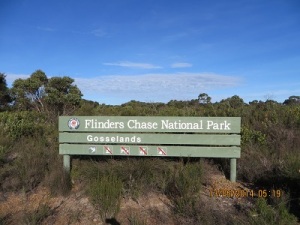 Flinders Chase National Park is the iconic Park on Kangaroo Island.  The Park contains the Remarkable Rocks, Admirals Arch vast areas of wilderness and Kangaroos who know how to raid your tent, well at least that was the case on our first visit there many years ago. It is probably not like this now: the Parks authorities actively discourage the feeding of native animals and there have been a number of significant fires through the Park. 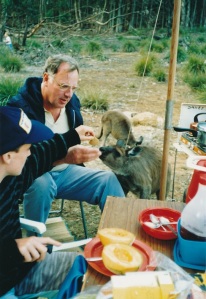 An Australian Sea lion & look a the size of the Ranger’s radio! JCD photo

You can also sharpen up your surfing skills by watching the seals at play. They are fantastic.  To give you an idea of the size of Kangaroo Island Flinders Chase National Park is 110 kilometres west of Kingscote. The brochures advising of the attractions of Kangaroo Island mentions its size, by stating it is the third largest island in Australia. Well can you work it out? I couldn’t at first. Here is the answer. While the Australian mainland is an island it is also a continent. So take that out of the equation.  Tasmania is the largest island, then  Melville Island in the Northern Territory then Kangaroo Island. We did not go to the main part of the Park on this occasion. We chose to keep the trip west as short as we could and thus activated from the eastern end of the Park.

I found a great spot in this Park just off the Playford Highway. We carefully negotiated a rather damp track watching for any signs of softness in the gravel. I set up in the usual way and always wondering how it will all turn out on the day. It was great.  Fourteen contacts kept me busy: VK5ZAR, Arno; VK5KGP, Graham; VK5KLV, Les from Port Augusta; VK3AMB, Bernard; VK3FQSO, Amanda; VK5TW, Trevor; VK5AV/M5, Tim near Lamaroo; VK5ZGY/M5, Greg; VK3UP/P3, Terry at Ballarat; VK3NFC, Steve; VK5NAQ, Peter; VK3LY, Bill; VK5BC/M5, Brian and VK3FJAE, Doug from Maryborough.