Our four day stay in Canberra came to an end on Tuesday morning 3rd January when we left to travel to Narrandera in New South Wales. Narrandera is one gateway into the Riverina area of NSW. We have stayed at Narrandera before and, on one occasion, spent time at the local cemetery looking for a memorial for one of Jenny’s ancestors. This time we were planning to visit the Murrumbidgee Valley National Park. This was a new park for me.

But more on the park in a moment. We planned to have lunch at Wagga Wagga and it was suggested by a volunteer at the local Information Centre that the Cafe at the Art Gallery would be a good choice. We were also told that the Archibald Portrait Finalists were on display at the Wagga Wagga Art Gallery. Here is a link to the portraits:

I made two choices, first, the portrait of actor Gary McDonald and second, the portrait of retired Victorian Supreme Court Justice Bernard Teague. Neither of my choices were successful but it will be interesting to see which portrait wins the People’s Choice Award.

After arriving in Narrandera we set out for the Murrumbidgee Valley National Park for some bird watching and radio. We took the Irrigation Way from Narrandera to Yanco and then took Euroley Road before taking the marked track to Turkey Flat. The first few hundred metres of the track into Turkey flat is quite badly rutted and, if wet, would be impassable. It presented no difficulty to our Patrol but a small car would bottom out. I would recommend seeking advice if using a two-wheeled drive vehicle. Turkey Flat was the third marked entry to the Park along Irrigation Way.

The notice board at Turkey Flat Wetland

New growth along the river 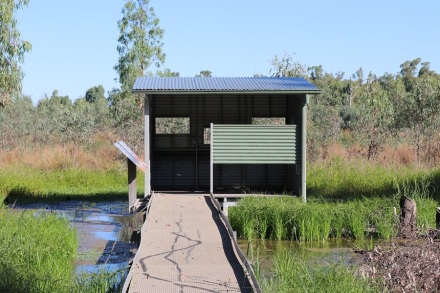 This photo shows the bird hide at Turkey Flat.

Despite the water on the ground and a wet year our visit was entirely mosquito free!

I checked 7.144 at 05:00 UTC and found it free.I gained 17 contacts which I was pretty pleased about given it was holiday time.

I enjoyed this unplanned activation. Signals were good and it was a pleasant way to spend a late afternoon. I appreciated all of the stations who gave me a call.

Next morning we set out from Narrandera to Moama. But before leaving Narrandera we decided to visit the Narrandera Wet Lands within the town and near the road bridge. The aim was to see some birds and take some photos. 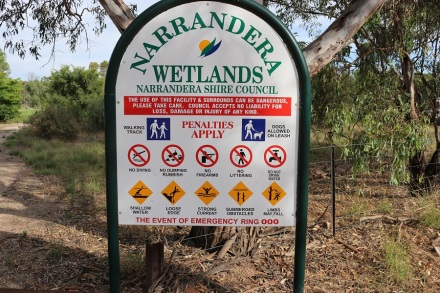 Stumps are popular photographic subjects but how much better when the stump is a dragon!