After leaving Halls Gap in the Grampians we travelled along the Western Highway towards Ballarat. On leaving Ararat, Mount Langi Ghiran looms high on the left horizon above the plains. I thought an activation of Langi Ghiran State Park would be feasible. We turned off the Western Highway near the park boundary, stopped at the railway line which is right on the Park boundary to check for trains and, as it was clear, we drove into the Park along Kartuk Road to the Langi Ghiran Picnic and Camping area. There were a number of campers at the ground and I thought my activity would be too intrusive so we drove the Langi Ghiran track though the park to exit onto the Western Highway a little closer to Ballarat. The Victorian Parks Visitors Guide has an excellent map of this Park. We did not find any safe parking areas along this track suitable for an activation. I did see an excellent spot soon after driving into the Park just off Kartuk Road, but that can wait for another time.

We decided to move onto Mount Buangor State Park, VKFF-0766. From late 1970 to the end of 1972 I worked at Langi Kal Kal Youth Training Centre. When I first went there on a work experience placement for three months at the end on 1967, I was told in very clear terms to stop at railway crossings and check carefully for trains. I was told that a staff member’s wife was killed at the crossing on Langi Kal Kal Road just a few years earlier. I used to think that the goods trains on the broad gauge were impressive – but the trains on the standard gauge are even more so and they travel faster! However, the broad gauge line from Ballarat to Ararat remains just that, a broad gauge line.

We have fond memories of Mt Buangor and Mount Cole State Forest. We purchased the first of our 4 x 4 vehicles, a short wheel based Toyota Landcruiser, while we lived at Langi Kal Kal and we honed our driving skills on the often wet and slippery forest tracks.

On this visit we drove in on the Ferntree Gully Road to the Bailes Visitor Area. 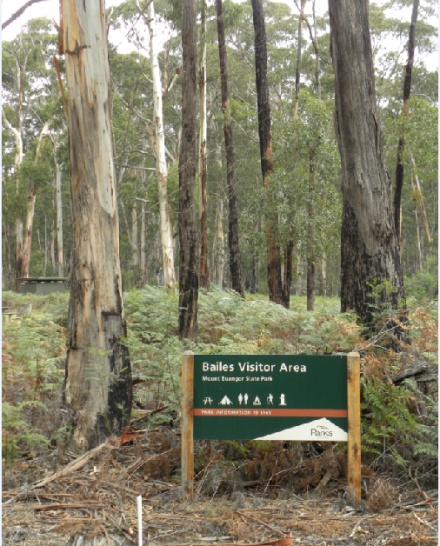 There was no one there. I decided to activate the Park and saw a Park bench and table that would suit my purposes admirably. I was hoping the rain would hold off: and it did! Soon after I had set up a 4 x 4 and trailer arrived with three males on board. The trailer had off-road and dirt bikes on board. I thought that would be the end of my peace and quiet. I met the Father of one of the younger men and he said that they would set up camp, the two boys would go riding and he would go back to work on a nearby property. The lads set off on the reasonably quiet bikes, the father left, I completed my activation and we had left before they returned. You can be lucky! 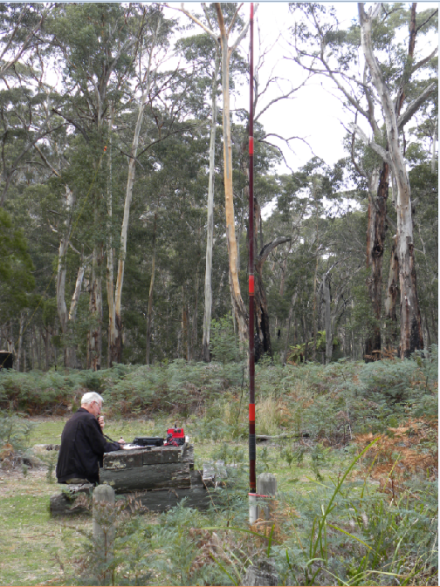 This photo shows my squid pole affixed to a car park boundary marker with the pole protected with a PVC pipe sleeve. JCD photo 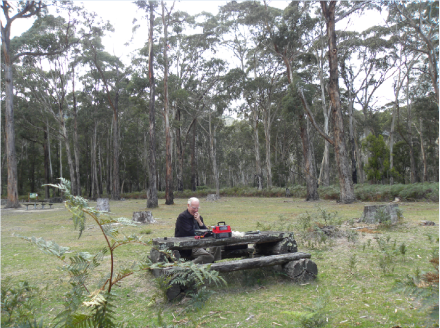 This photo gives a view of the Visitors Area. There are picnic tables in place and toilets. The surrounding bush land gives a good idea of what it might have been like before logging. 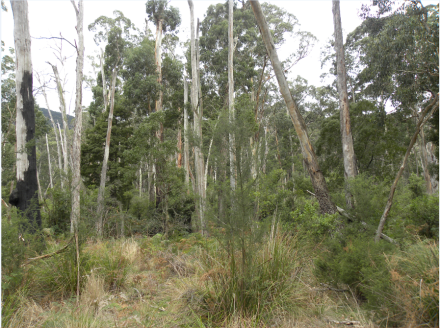 I had a great time. Paul, VK5PAS/P, at the Overland Corner meeting in SA, had organised the attendees to give me a call on the portable radio (a Codan) setup  by Ivan, VK5HS. I had a steady stream of contacts from Overland Corner interspersed by other stations, probably enhanced by my activation of a lesser activated Park?

VK3FQSO, Amanda told me she planned to attend the ‘Show and Tell’ at the Brisbane Ranges National Park. I said not to tell any VK3s and that I hoped none were listening because I would be attending as well. I want my attendance to be a surprise!

Thanks to all who gave me a call.

It was time to pack up and drive to our accommodation at Ballarat.

At 06:12, I had a contact from the motel parking lot with Paul, VK5PAS/P5 at Pooginook Conservation Park. Signals were 5 and 9 both ways. I have an 857D in the car and I mounted my Hustler vertical antenna for 40 metres on the base on the bull bar. The Hustler whips are great. They are centre-loaded and work really well: but they are tall!