Entry to Barmah NP from Barmah township: about eight kilometres

Today I went on a Murray River cruise which motored up-stream though a very narrow part of the River called the ‘Barmah Choke’, on in another brochure ‘The Narrows’. The cruise, with Kingfisher Cruises, was great. It was a grey and rainy day when the boat left at 10:30 local time and the sun was beginning to burn off the cloud when the cruise finished at 12:30pm. The boat left about 100 metres outside the National Park, and upon return I could not but take the chance to activate the Barmah National Park!

The Murray at its narrow point

I found the old cattle yards just inside the Park and set up my station there. I used my FT817 and a linked dipole for 40 and 20 metres. Sixteen contacts later I packed up as a drive to Wagga Wagga was before me. The 40 metre band was in much better condition than over the last few weeks and I was astounded by the signal reports although distances covered were not great.

A great place for a camp 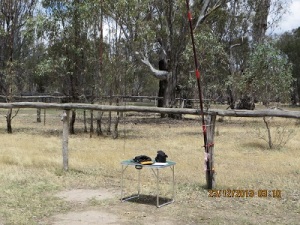 The Shack – supporting the Squid Pole on the cattle yard post

I called first on 7090 at 01:55 and VK3VEK, Kevin, answered my call. Kevin is in Stawell and my signal report was 5 and 7.  I gave Kevin 5 and 9. I thought that conditions were going to be better than recently on 40m and I might have a bit of fun! But I had to go searching and I heard VK3XX, Gordon signing off from a contact on 7146 at 02:05. Signals were 5 and 9 both ways. I then had a contact with SOTA station, VK3XPT/p QRP on VK3 VT 052, Mount Fatique on 7090. Perrin gave me 5 and 1 and I gave him the same: I was really pleased to have a contact with another SOTA station. I then moved to 7100 and there I stayed contacting in turn, VK5PAS, Paul; VK3BWZ, Bob; VK5WG, Nev; VK3NJ, Ross; VK3ATT/QRP, Yuri who made a video of the contact; VK3TCX, Ian and VK3SOG, Fred who lives near the Toy Shop. Which Toy Shop? There is only one Toy Shop! How dangerous is that! I had more contacts, VK3CMG, Glenn; VK3JD, John; VK3VCE, Dave, VK3EE, Tom, VK3JP and finally Yuri to advise of the video. 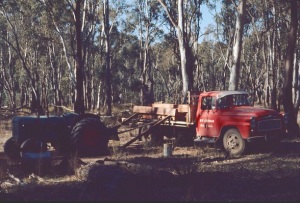 On an earlier camping trip to the Barmah Forrest in July 1972 we saw sleeper cutters at work – probably cutting red gum sleepers for the still significant Victorian Railways.