This small park just on the Adelaide side of Keith to the northern side of the Dukes Highway and next to the Adelaide to Melbourne railway line, commemorates the life of Kelvin Powrie, an agricultural scientist, who worked in the South East and was instrumental in determining what trace elements were needed to make the local farming land more fertile. The plaque detailing this information was dated 1969 and he died in 1968. Tony, VK5ZAI, remembers him and told me more about his life and work. The park is clearly visible from the highway because of the trees and understory vegetation compared with the farming properties around it. There is a short walk to a look out providing interesting views of the surrounding land. 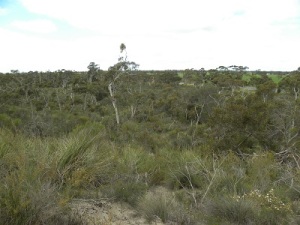 A view from the lookout in Kelvin Powrie CP, Dukes Highway in the background.

Mount Monster Conservation Park is about 13 kilometres south of Keith just off the Highway. It is clearly visible as a small hill and rises about 500 metres above the otherwise flat country side. It is a beautiful park and the 19th century gold export route from the Victorian Gold fields to South Australia passed though this park.

‘Good strikes in the Victorian goldfields prompted many South Australian men to leave their families and cross the border in pursuit of fortunes. Police Commissioner Alexander Tolmer and a group of mounted troopers were sent to escort gold from the Mt Alexander fields, near what is now Castlemaine, back to Adelaide banks. They modified a route , used by gold seekers heading to central Victoria, and during 1852-53 made 18 trips carrying 328,509 ounces of gold’. source Northwestern Victoria, Poster and Map, Australian Geographic, 1996.

One thought on “Homeward Bound”